It was expected that after nearly a decade on the blockbuster sitcom “Friends,” star David Schwimmer would have at least some sense of comedic rhythm. However, I never expected the guy to direct a British slapstick comedy. Turns out, he does a pretty swell job.

Five years ago Dennis (Simon Pegg) made a horrible decision: he left his pregnant fiancée Libby (Thandie Newton) at the altar. Now a sad sack mall security officer with a smoking habit and 30 extra pounds, Dennis finds his life lacking, but refuses to do anything about it. Into Libby’s life comes Whit (Hank Azaria), a handsome financial wizard who is better than Dennis at everything, including long-distance running. Dennis, feeling jealous, agrees to partake in an upcoming marathon to prove his worth to Libby, relying on his gambling friend Gordon (Dylan Moran, “Shaun of the Dead”) for support. Trouble is, Dennis knows nothing about running, leaving his training a brutal learning process and a test of commitment.

Co-written by Simon Pegg and Michael Ian Black, it’s unsettling at first to observe how wacky a picture “Fatboy” is. Schwimmer has a heavy burden to bear with this screenplay, which overflows with combative situations of outright farce, but he proves himself capable of arranging big screen comedy. It’s not an outstanding effort, but a tricky script like “Fatboy” needs someone willing to flow along with the lunacy, and Schwimmer doesn’t fight this circus of fears and humiliation in the least.

“Fatboy” is really top notch when it concentrates on silly situations and the myriad of befuddled reactions Pegg and Moran provide. They are an amazing pair of actors, and their interplay gets the material up and moving, hurdling the often needless pit stops of gross-out humor (a splendid blister joke is ruined by a pus-drenched punchline) and the eventual plunge into one-dimensional screenwriting. Schwimmer is wise to keep his camera trained on Pegg at all times, as the actor can make any sequence worthwhile with his unexpected, jittery retorts and reactions. It’s an iffy character to play, since, even with full acknowledgement of legitimate fears, Dennis is a bastard. Pegg’s interpretation here is miraculous in getting the audience to comprehend his damaging decisions, and Schwimmer’s direction reinforces the funny.

There’s a wealth of smiles watching Dennis gear up for his marathon debut and the general tightening of his life while dueling with Whit and his surface perfection. Again, Pegg really gives 100% to the character, and the results are a gas. Problems arrive when Pegg and Black want the audience to feel something for Dennis’s struggles, going about it the wrong way by backing up the melodrama truck and dumping noxious heartache all over the final act. Pegg’s performance is strong enough to convey Dennis’s regret, it doesn’t need to be underlined, and I detested how the script turns Whit from a believable rival to moustache-twirling villain; the film loses itself to annoying pandering qualities in a desperate last-chance grab to appeal to all audiences instead of intelligent ones. “Run Fatboy Run” is too rich with potential to be fussing around so carelessly with cliché. 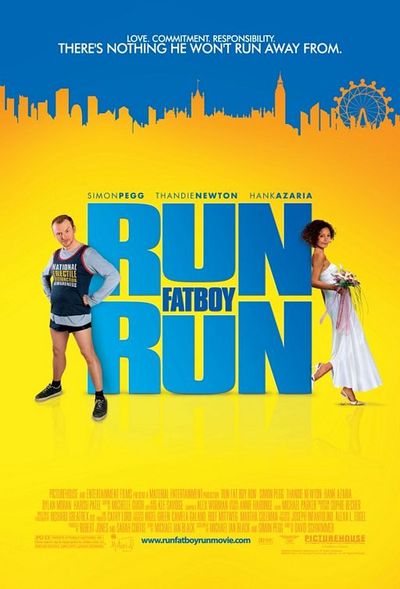