Film Review: Never Back Down 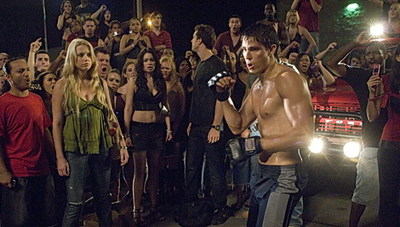 Did you find the “Karate Kid” too challenging? Too cerebral? Too thematically dense? Then “Never Back Down” is the film for you. The cinematic debutante ball for Mixed Martial Arts (MMA), the picture is an artistic travesty. I’m not sure why the producers even bothered with a plot.

When a tennis scholarship for his little brother whisks the family away from Iowa to Orlando, troubled teen Jake (Sean Faris, “Sleepover”) immediately brushes up against the school bully, Ryan (Cam Gigandet, channeling his inner Zabka) and furthers his cycle of self-loathing by engaging in an MMA fight that he loses quickly. Beaten and frustrated, Jake and pal Max (Evan Peters, “Sleepover”) begin fight lessons with MMA guru Jean Roqua (nicely played by Djimon Hounsou), hoping to improve their skills and dish out some revenge. Along the way, the training changes Jake, offering him a chance to confront his personal demons and break his bad habits. However, Ryan isn’t going to go away easily and demands more blood.

“Never Back Down” is a movie produced to entertain children, but that doesn’t excuse the idiocy of the filmmaking or the non-stop parade of despicable directorial choices. Take away the fact that the screenplay by Chris Hauty is merely a crude photocopy of the classic wuss underdog story “Karate Kid,” and all that’s left behind are a variety of pretty boy actors who couldn’t emote realistically even if held at gunpoint, and hacky, trendy stylistic choices made by director Jeff Wadlow (“Cry_Wolf”) that bury the rest of the film in suffocating gloss.

Wadlow visits every common sight: flash cutting, open-shutter photography, x-ray broken body part reveals, porno-chic teen lesbianism, and even a moment of body-mounted camera silliness: the Taj Mahal of visual bankruptcy. Wadlow is all style no substance, and his direction of “Down” is laughable from every conceivable angle; it’s like watching the hokiest, dullest Nickelback music video imaginable.

Wadlow has difficulty processing the drama as well, submitting basic feeds of information and character backstory with sitcom elegance; he fumbles any opportunity for the picture to resemble a splinter of real life by reducing every beat to its achingly obvious endpoint. Subplots such as Jake dealing with the guilt over his father’s death and Jean battling his own family demons grind the film to a halt with their eye-rolling melodrama and afterschool-special execution.

The screenplay also includes a pass at exposing today’s media-obsessed teen culture, where every move is captured by a camera phone and posted to YouTube within seconds. A statement denouncing oversaturation, or a chance to pipe in blatant product placement? You tell me.

Of course, the lack of a single character worth caring for makes the theatrical experience even more excruciating. A faceless collection of older actors trying to pass themselves off as impossibly-sculpted teenagers (not a pimple in the room), “Down” radiates unpleasantness.  Jake’s whining and baffling disrespect to his mother is a good example; a character strangely presented as a blathering harpy when, in fact, she’s the only person in the script who offers an accurate sense of responsibility. Why demonize her? Because the screenplay was written in crayon, and any taste of reality to crawl into “Down” would then force the film to put forth actual effort. That, of course, would take away precious screentime from the screeching power-pop soundtrack and shots of glistening 26-year-old, L.A. gym, desperate-actor abs.

The real stars of the show are the MMA sequences, and I’ll be the first to admit total befuddlement with this sport. A variation on boxing (think Twyla Tharp crossed with Greco-Roman wrestling), MMA, as presented in “Down,” lacks a common theme of honor and humanity other brutal contact sports at least attempt to suggest. In the film, it’s mostly used to show cretins with bad haircuts beating the tar out of each other, broken up by the occasional sage piece of new age advice by the resident Miyagi stand-in, Jean. I’m positive there’s more to MMA than the crude aggression “Down” presents, but to suggest the sport as a cure of sorts for teen hostility sends the wrong message. This is dangerous stuff “Down” is toying with to turn a quick buck, and I fear for the impressionable kids that see this slick piece of garbage and feel the need to pound their neighbor without understanding what these professional fighters stand for. I’m sure that’s a common complaint with action films, but it’s valid with “Down,” especially the manner in which it prostitutes itself toward young audiences.

Because Wadlow is bereft of ideas, the climax of “Down” takes place in the world’s most poorly arranged nightclub parking lot, where the final showdown can take advantage of rap video lighting and other visual gimmicks to put this anemic rivalry to bed. Such big-screen ostentation is unnecessary when a passable screenplay is involved, but this picture is hopeless from frame one. “Never Back Down” is a tired, asinine attempt to piggyback on a fight club subculture and it does wonders to make MMA seem like the most idiotic undertaking in recent memory. 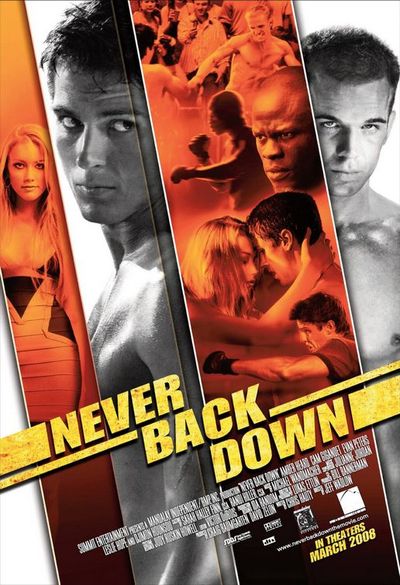 As usual, I find your supposedly "witty" acerbic reviews to be far more insipid than the movies you supposedly are too self-aggrandizing to bestow a single kind word upon.

Hope you have fun wearing out that Rambo DVD, dude. Oh, and take some happy pills while you're at it.

Me, I'll take my insanely hot date to Never Back Down (at her request) and have a good, cheesy time. Hey, it's cheaper than passes to a Star Trek convention, right?

I'm pretty sure this "threepop" has never even seen a girl before. At least they have those at Star Trek conventions.

Ha ha! I'm guessing his real name isn't threepop...who would admit to wanting to go see that "cheezy" man on man action? Maybe that is his real name? Maybe he loves the dudes...

Any follow up with Mr. Threepop? Did he enjoy the film? How did his date go? He set himself up for this, I think we all want to know.