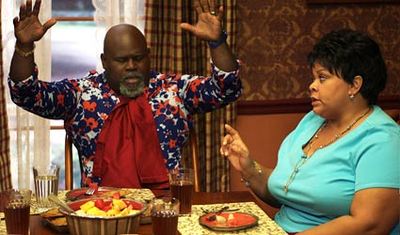 Last fall it looked as though Tyler Perry finally made some progress as a filmmaker, retaining his screeching smirk of melodrama, but finding human elements to work with in “Why Did I Get Married?” I just knew it wouldn’t last forever, and “Meet the Browns” drags Perry back to the quicksand of laborious storytelling and grandstanding nonsense that’s made him a millionaire, keeping close to his pandering roots out of fear of truly spreading his artistic wings.

A single mother of three living in Chicago housing projects, Brenda (Angela Basset) has found herself without a job and her life quickly falling apart. One day a letter arrives informing Brenda that her father has passed, along with bus tickets to Georgia to attend the funeral. Hesitant, she and the kids make the trip, only to find the loutish, backwoods Brown family (including Jennifer Lewis and David Mann) waiting for her. Overwhelmed by the country life and the prying eyes of her extended family, Brenda finds comfort in Harry (Rick Fox), a former pro basketball player looking to help her eldest find a future in hoops, while also laying down some serious woo.

“Married” didn’t thrill me, but it demonstrated Perry’s willingness to lay off the deafening horn of histrionics and play the story more smoothly, taking a much needed breather from his usual frenzied extremes. “Meet The Browns” refuses to build on this important foundation, with Perry sprinting back to his comfort zone of theatrical adaptation and rafter-quaking performances. It’s disheartening to witness.

If you’ve partaken in the other Perry creations, you’ve pretty much already seen “Meet the Browns.” Perry’s not rocking the boat with this feature film, working through a familiar pastiche of broad comedy, squealing performances, and blunt messages on the importance of...well, I’m not exactly sure in this movie. The film appears centered on the theme of trust, but the screenplay overcooks the idea by having Brenda practically convulse anytime she finds herself being offered assistance. There are tangents about the pitfalls of drug dealing, absentee fatherhood, and gambling as well, but Perry isn’t able to connect the dots as easily this time around, finding his screenplay too tangled to make sense out of it. Subplots are either left to wither away or they’re just bluntly gutted out of the movie, with several sloppy gaps in the story.

Actual narrative doesn’t really matter to Perry, since these movies are simply vehicles for actors to scream at the camera. Jennifer Lewis wins the gold star for this production, turning up the treble on her chainsaw voice to cover for a role that quite literally makes no sense. Bassett isn’t nearly as piercing, but her insistence that every emotion be conveyed with 100 different facial contortions is exhausting to behold, through she has nice chemistry with Fox, who plays the Perry-mandatory dream hunk role with minimal fuss.

From what I’ve read, the film version of “Meet the Browns” has been altered considerably from its stage incarnation, and perhaps that’s why this movie feels so relentlessly distracted and overweight. The structure is off here; Perry can’t settle on an ending, so he includes two of the fairy tale kind, and he volleys between embarrassing punctuations of melodrama and southern-fried slapstick far too wildly, making already ridiculous situations unbearable and downright despicable at times.

As proven through reasonable (not remarkable) box office returns and the venomous mail I receive with each new Perry pan, there’s a crowd, an army perhaps, that will soak up anything they’re served. Perry might be out to create a community spirit in theaters across the country, but, again, that doesn’t excuse his thick-fingered mangling of dramatic expression and his questionable taste in racial caricatures. “Meet the Browns” is a stinker, but at this point, it’s like yelling at a brick wall. 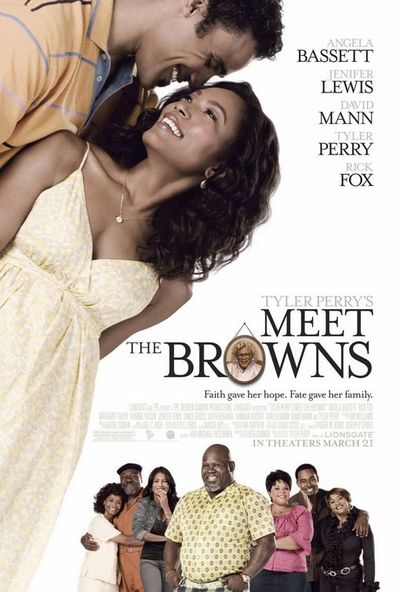 This movie sucked.It was the same old tyler perry bullshit movie as always.Dude is making a damn fool out of folks that pay to see the same ole scripts from this guys brain.It was not creative,boring and just very elementry.Shame on tyler perry and I want my money back!

U must be a kind who doesnt appreciate life for what it is and is always taking things for granted. Tyler Perry has a purpose for the plays and movies that he writes. And obviously you are to dumb to comprehend that. And Tyler Perry must be worth something YOU keep going to watch his GREAT works.

Maybe we didn't view the same movie. Tyler's movies always bring forth positive messages about love and forgiveness and this time with a little comedy from good ole Mr. Brown. I really enjoyed the movie and I am so tired of white critics putting their spin on movies and issues they can't possibly understand in their world. I am just glad Tyler doesn't depend on Hollywood support for his success. If the movie was titled 40 Year Old Virgin then of course it would have gotten an A. If you don't like Tyler, fine, don't go view his movies just to put them down. Go critique Meet the Spartans or something where I am sure it will recieve high marks. Great job Tyler, and I can't wait for A Family that Preys Together and Madea Goes to Jail.

Brian, I'll just say this so it comes from a friend. You're a racist because you don't like Tyler Perry's movies. You're a very bad man, very bad. Get over it, skin color has nothing to do with liking or not liking a crappy movie. Whether it's about white people, black people, the chinese, a bad movie is exactly that, a BAD movie. Give up the race card people.

What's with the rest of these comments? It's not like he did the review in black face...if it's a crappy movie, it's a crappy movie! Who cares what color this guy is? This movie was stupid...and I say that as a black woman. I feel bad that your job makes you see this kind of bull man...

Finally, the Blacks finds a great piller that can stand on its own without the White Controlled Hollywood. Tyler is doing just fine and this is good for the Movie industry.

I like To capitalize Random words In My sentences Too.

As a Tyler Perry fan I must say I was disappointed by the movie. Yes the overall message was a positive one however it just wasn't his best work. I was listening to the Tom Joyner show and one of his listeners brought up a good point. Why is it that in just about all Tyler's movies and plays (I did say just about meaning not all) the "bad" guy has darker skin and the "good" guy has lighter skin. I went back through my collection and its very true. Just a thought (I don't think it was done on purpose... I still love his work and will continue to support).