Film Review: Horton Hears a Who 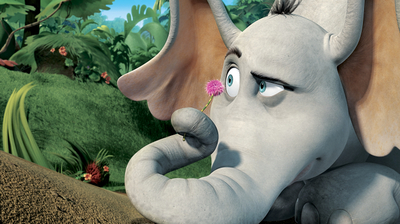 While the memory of Dr. Seuss remains in a troubling state of cinematic rape, “Horton Hears a Who” is by far the most palatable feature-film contribution created so far. Granted, the other options weren’t hard to surpass (“The Grinch,” “Cat in the Hat”), but there’s an askew pop sensibility that rings throughout the picture, making it disposable, but not without ample charm.

Living in the jungle of Nool, Horton (voiced by Jim Carrey) comes across a speck that emits strange sounds only he can hear. Placing the speck on a clover, Horton begins to hear the voices of the Whos, the population that resides in the speck. Making contact with the Mayor of Whoville (Steve Carell), Horton is delighted to be placed in charge of protecting the speck and finding it a new home. Standing in his way is Kangaroo (Carol Burnett), who lacks faith that other forms of life could live beyond her perception, and mounts a great effort to stop Horton. Simultaneously, the Mayor has to deal with his new reality, while trying to keep the Whos alive as their world is jostled around during the relocation.

Instead of embracing the sweet-natured, slightly-curdled innocence of Seuss’s imagination, “Horton” plays more like a Looney Tunes offspring. It’s a relentlessly energetic piece from animation vets Jimmy Hayward and Steve Martino (both making their feature-length directing debut), who appear in a panic to stretch the story out to 90 minutes of screentime, piping in a strange carnival of slapstick and expected Carreyisms, hoping to fashion a film with more edge to appeal to modern family audiences.

Things get off on the right foot with narration by Charles Osgood and the design of the dual worlds, taking the flat, spare Seussian cues from the page to the CG-animation world, where the filmmakers give the visuals desired depth and elasticity, while retaining their general oddness. Certainly “Horton” is faithful to the source material in areas of plotting, but the picture is much more sarcastic and goofball, especially in Jim Carrey’s “Aladdinesque” performance that has Horton slinging around impressions of Henry Kissinger and bouncing around as though he’s hopped up on speed.

That angle of performance is extended to the entire cast, including the likes of Seth Rogan, Will Arnett, Isla Fisher, Jonah Hill, Jamie Pressly, Amy Poehler, and Dan Fogler. Along with Carell, it’s an interesting jumble of vocal performances, but the whole affair feels too trendy at times; the picture desperate to appear relevant instead of reaching for a more golden, timeless appeal. A great example of the strange direction “Horton” takes is a mid-movie anime sequence, where our hero imagines himself in a “Pokémon” world fighting off danger from all sides. It’s amusing, but feels a little too hip for the room. Another showcase of makeover trouble: Mayor’s son JoJo has been turned into a teen emo recluse with a Zac Efron haircut.

While the modern touches induce grimaces, the general tone of “Horton” is pleasant enough to pass for a matinee showing. The central tale of friendship between Horton and Mayor is an enchanting pairing, splintering the film off into two subplots that balance remarkably well, though the edge goes to Horton and his forest friends who both help and hinder his progress. Scrape out a touch of the zany, and it’s nice voicework from Carrey and Carell, who provide the film with clever moments of interplanetary communication.

Perhaps running about 20 minutes too long, “Horton” starts to feel a little sluggish searching for a note to end on. The one selected here is a duet of an REO Speedwagon song, effectively scrubbing away whatever whimsical Seussian undertones are left standing by the end credits. As throwaway as it is, “Horton Hears a Who” still shines with a fresh coat of mass-appeal shellac, just don’t walk in expecting something as cozy and magical as the original book. 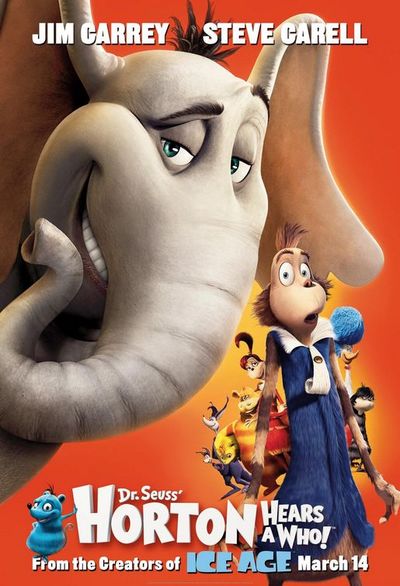 Dr. Seuss is classic; after seeing Horton Hears a Who i was reminded how much good stuff that guy can pack into a simple storyline...