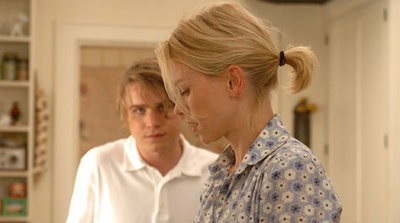 I have no problem with Michael Haneke, the confrontational Austrian filmmaker who loves to unsettle his audience. With movies like “Piano Teacher” and “Cache,” Haneke has established himself as an artistic giant willing the plunge the depths of the soul to observe unsettling human behavior and dramatize the peculiarity of response. So, it comes as a disappointment that for his Hollywood debut, he’s decided to remake one of his weaker forays into cattle-prod cinema.

Arriving at their lakeside vacation home, Anne (Naomi Watts), George (Tim Roth), and their young son Georgie (Devon Gearhart) begin preparations for a weekend of grilling, boating, and quiet time. Into their home walk Paul (Michael Pitt) and Peter (Brady Corbet), two teenagers posing as friends of the neighbors; the boys are charming, but disquieting, and when they refuse to leave, Anne and George realize that their lives are at risk. With the family held captive in the home, Peter and Paul commence a night of life or death games, toying with their hostages, and us, the audience.

1997’s “Funny Games” was a fascinating attempt to address violence in the media, and how casual viewers are complicit in these horrific creations, perhaps even delighting in them. Haneke was attempting to revive the senses with this potent work, bating, taunting, and forcing the audience to sit through a hellish night of torture as seen through our surrogates, Peter and Paul. The end result was effective, but glacial; better swallowed as a collegiate example of psychological cinema than a film to be consumed and digested.

2008’s remake is a nearly shot-for-shot effort, not unlike Gus Van Sant’s misunderstood “Psycho” rant from 1998. The new “Games” matches up to the previous incarnation in almost every facet of production, only now the actors are famous international film stars and Haneke has his best shot at grabbing the attention of a wide audience. I can see the temptation of a recycled endeavor, but why this material?

As Peter and Paul embark on their night of rambling monologues and piercing torture, “Games” reveals itself to be one sick puppy of a movie, but that’s the point. Haneke is deliberately pushing around cynicism and bodily damage to weave in his commentary on screen violence. For those who haven’t seen the 1997 incarnation, “Games” will surely be a difficult sit. Observing the two boys stalk Anne and George, playing games of humiliation and offering the illusion of chance is disturbing and not for weaker constitutions. Haneke is not one to refuse a particularly potent moment of suffering, and the new “Games” doesn’t hold anything back.

Either one subscribes to Haneke’s breathless nihilism and sarcasm (which extends to Peter and Paul breaking the fourth wall and asking what brutality the audience would like to see, making us the accomplice to the crimes) or you give up immediately and write the whole thing off as another Eurotrash director masturbating with his camera while the critical elite genuflect before him. I wouldn’t disagree with either reaction, but my personal choice is a nap. “Games” is a complicated exercise in shock value and to draw out the film to 100 endless minutes dilutes the intended effect. Both “Games” are overlong and cringingly redundant creations, not just hitting the same points repeatedly, but smashing them into little pieces until they lose potency, forcing Haneke to restart his engine with another bit of distasteful conduct, or blast his secret weapon to rub the audience the wrong way: death metal.

The novelty of watching Watts and Roth in these roles is compelling, with both actors offering full-bodied, snot-slicked interpretations of emotional annihilation that match Haneke’s enthusiasm. I was less impressed with Brady and especially Pitt, who all too often seems as though he’s reading the lines from cue cards, not to mention lacking the upper crust contempt that lent the original film a beguiling depth. The acting is actually secondary to Haneke’s spiked vision, which has traditionally been a provocative free spirit plump with surprise. Now tethered to the demands of repetition, the end product is a curiosity best enjoyed with a sold-out crowd of agitated newcomers. I’m thinking full theaters are a pipe dream for this fruitless remake, and I hope Haneke retreats back to original material as soon as possible. 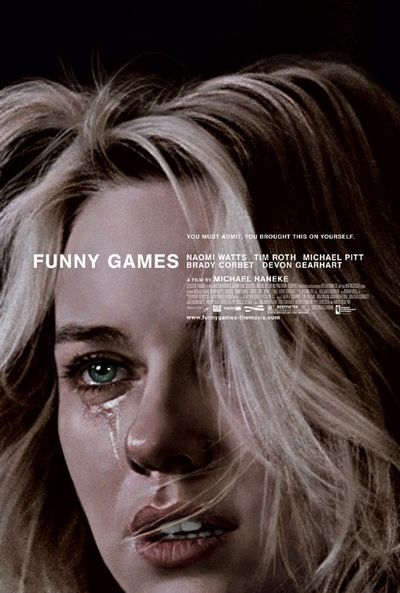