(Note: This film was not screened for press) 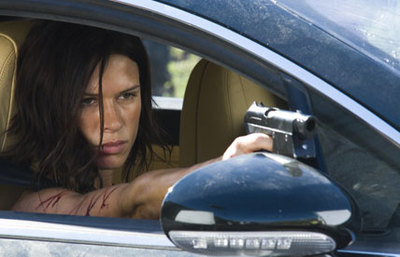 When the Reaper virus rears its ugly head in 2008, it threatens to wipe out Scotland, forcing government officials to do the unthinkable: wall off the country to isolate the infected. 25 years later, the virus has returned, and the secret of a potential cure is locked away in the quarantined country now populated with the tattooed and cannibalistic dregs of humanity. Wasting no time, the cops (led by Bob Hoskins) look to Eden Sinclair (Rhona Mitra) and her band of specialists to penetrate a makeshift city and recover a cure from gang leader Kane (Malcolm McDowell) before the Reaper has a second chance to wipe the population off the planet.

If the plot sounds like a job for Snake Plissken, you’re not far off. Apparently Marshall was munching on a serious dosage of “Escape of New York” pills when manufacturing “Doomsday,” resulting in not only a comatose actioner, but a derivative one as well.

Cracks in the foundation show up immediately in “Doomsday,” particularly in the casting of Mitra as the resident badass, Eden Sinclair. Mitra is impossibly beautiful, but she’s also impossibly bland: a personality-free anti-hero who’s left hanging by Marshall’s remote screenplay, which doesn’t have time or patience to develop any character. It leaves the picture a goulash of caloric emptiness, with Marshall preferring a sensorial assault over any form of dramatic interaction. He’s making a dumb 80’s action sideshow, yet in his quest for excess, he’s lost any potential, and quite critical, focal points along the way.

Because “Doomsday” appears to come from the place in Marshall’s brain that encourages mediocrity, the picture somehow moves from “Escape from New York” to “Lord of the Rings” in the second half, where Sinclair tracks Kane to a touristy Scottish medieval castle, where he lords over his horsemen and gladiators with an iron fist. The tonal change isn’t out of the blue since, by this point, Marshall’s exhausting ADD has been firmly established. However, that doesn’t excuse how goofy the movie becomes in this knights-and-arrows section of the film, amplifying the disconnect between what Marshall thinks is a bloody good show and what nonsense is actually happening onscreen.

“Doomsday” is a mess of lousy filmmaking and unrelenting artistic bankruptcy, smashed together to form an ear-splitting, overcooked, awfully irritating shell of an experience. Whatever bloody-knuckle merriment Marshall was intending with this tribute to the cinema speeds of the 80s has been lost in the headache-inducing translation. 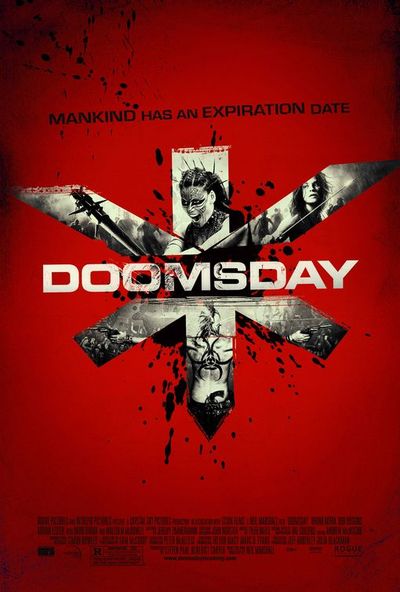 Well written takedown. Thought Dog Soldiers was shallow but showed promise. The Descent fulfilled that promise and so much more. When I found out they weren't screening Doomsday for critics I feared the worst. Sadly, it sounds like I was right. Let's hope he rebounds next time out. Or, perhaps The Descent was just a glorious fluke.

Is Bob Orndorf related to WWE Hall of Fame Superstar "Mr. Wonderful" Paul Orndorf???? If so, maybe he should be more humble on the mindless action hi-jinx.Also,if you love movies enough to want to actually make them and thought hard about it, instead of just wanting to envision yourself as Spielburg,then you are more likely to admire a film like Marshal's "Dog Soldiers".

Skippy, quit bothering the nice man and his fantastic review and come upstairs for dinner.

You have a tough day of 3rd grade tomorrow.

Look, even a dodgy combo of several previous films can be good. I’ve seen many thousands of films and the acting and editing and special effects was everything I expected it to be. Some films are just meant to be good dirty blood and guts fun, and that’s what this one was for me. When I first saw Blade Runner, Mad Max, and Highlander I saw future classics and while Doomsday may not burst to the surface destined to be a classic, it had a great deal of heart and soul as well as walking tall acting. Bravo Marshall and the entire cast and crew. I for one am longing for less predictable Hollywood stocking stuffer films and more classic Rank/Hammer type productions.