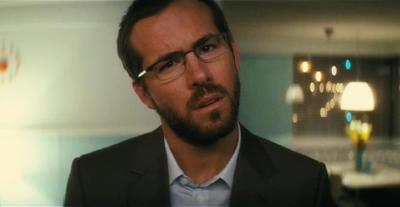 “Chaos Theory” is not a comedy. The marketing folks at Warner Brothers are selling the picture in a way that promises a slapstick enterprise, but that isn’t this movie. “Theory” exists in darker corners, and while there are still plenty of laughs, the feature is much more sincere and crushing than any marketing department could possibly process.

Frank (Ryan Reynolds) is an uptight control freak, hoping to launch his career on the lecture circuit preaching the wonders of time management. Blessed with a loving wife (Emily Mortimer) and daughter, Frank’s sense of order is disrupted when, on an average day, his misses the ferry to work. From there Frank’s world slowly crumbles, and he finds himself in impossible situations dealing with devastating news he can barely process. While his friend (Stuart Townsend) attempts to talk him down, Frank learns he can only find solace in the randomness of life, and proceeds to spend the rest of the week chasing every whim he’s suppressed.

While director Marcos Siega owes me 90 minutes of my life back after sneaking the execrable Nick Cannon comedy “Underclassmen” into theaters a few years back, it’s a delight to not have to say the same about “Chaos Theory;” it’s is an improvement not only in material, but also in directorial inspiration and courage.

The line Siega is chasing here leads to extensive heartbreak and uncomfortable professions of feelings that are a tough sell to the average audience; while “Chaos” doesn’t kick down forbidding psychological doors, it does have the gumption to follow some subplots to their itchy conclusions. Before I wasn’t even sure Siega knew how to stand up without getting dizzy, but “Chaos” reveals a tighter, more mature piece of work from the filmmaker. He should make it a habit.

The screenplay by Daniel Taplitz (“Commandments”) takes Frank on a wild ride. It’s a tense mix of drama and comedy that could easily trip over itself with sentiment, but “Chaos” pushes through the mire looking for strategic emotional points to hit. It’s difficult to explain where the picture travels without hitting some major spoilers, but I will say that Frank is given a heavy load to carry midway through the story. The combination of Taplitz’s considerate, honest writing and the way Reynolds masterfully swallows these abrasive moral crossroads gives way to terrific scenes of both merriment and misery.

Another large selling point of the film is the cinematography by Ramsey Nickell, who bestows “Chaos” with an ethereal glow that’s as sumptuous as it is hostile. Everything in the frame has a soft radiance to it, with severe attention placed on extravagant lighting sources and careful frame composition. It’s extraordinary work, making “Chaos” one of the better looking films in recent memory.

“Chaos Theory” is not a simple picture to summarize or digest. I can now see why Warner Brothers has been reluctant to release it, much less give it a more accurate marketing tone. It’s a marvelous picture that plays by mainstream standards, yet has a mind of its own, following the inconsistencies of human behavior and agonizing turns of fate. As long as you don’t tie your giggle bib on too tight, there’s an exquisite depth and unpredictability to “Chaos Theory” that’s wonderful to observe.