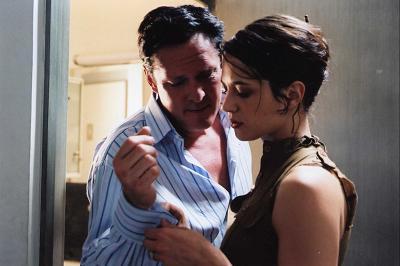 As much as I was satisfied with the new thriller “Boarding Gate,” I wouldn’t dare recommend it to anyone. This is the type of film best left to be stumbled upon late one night when either fatigue or booze has its sweaty grip on you; when hazy images, bizarre notions of human behavior, and muddled logic are better appreciated, or at the very least, more easily tolerated.

Sandra (Asia Argento) is a small-time criminal caught between lovers and schemes. When a drug deal goes south, Sandra is pushed to confront her violent, kinky relationship with businessman Miles (Michael Madsen) to protect herself. At the same time, she’s challenged by Lester (Carl Ng), another lover who wants to get rid of Sandra, but can’t quite bring himself to follow through. Sent around the globe to sort herself out, Sandra is met with double-crosses and attempts on her life, leaving her in a state of confusion as she switches over to survival mode.

“Gate” comes from director Olivier Assayas, the noted French filmmaker behind wildly uneven, potent fare such as “Irma Vep,” “Clean,” and “Demonlover.” He’s never been my first choice when it comes to emotionally resonant cinema, and “Gate” continues that tradition with this sleepy, strange thriller. It’s tough to say if this is Assayas’s most polarizing work to date, but I’m confident it’s in the top three.

“Gate” is essentially a theatrical production packaged as a light international crime thriller. There’s little in the way of pep; the screenplay instead draws its personality from extended exchanges between the characters, best sampled within the scenes centered on Sandra and Miles. As two frayed ends trying to clean up their acts, the characters psychologically square dance with each other for everlasting takes. There’s little in the way of biting dialogue to enjoy, but Madsen and Argento (the Jackson Pollock of splattered sensuality) look to be enjoying the performance limbo, which eventually gives way to complicated outbursts of sexual tease and libido collapse. The two scenes they share make up nearly 1/3 of the running time, and for some, the slow-drip moments will feel like torture. However, there is undeniable tension between the actors and an uncommon undercurrent of lustful unpredictability in the scenes.

Once “Gate” breaks out of its gaze and travels to Hong Kong, it transforms into something more routine, but not completely without surprises. Sonic Youth’s Kim Gordon arrives for a cameo as Sandra’s underworld guardian angel, and the final movement of the picture has some nice Hitchcockian touches without sprinting towards an all-out thriller extravaganza.

“Gate” is no easy sit. Assayas isn’t going to win any new fans with this picture, but there’s something oddly persuasive about the mood generated by the filmmaker that’s painless to zero in on. It’s not a perfect movie. At times, it’s not even a movie. Yet the overall taste “Boarding Gate” leaves behind is intriguing enough to appreciate the whole elongated enterprise. 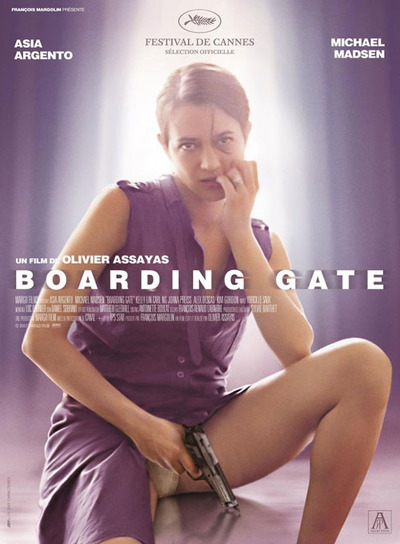