“Blindsight” encapsulates extraordinary feats of bravery and astonishing accomplishments, but remains reined in by the pesky limitations of reality. However anti-climatic the outcome, “Blindsight” is an undeniably engrossing, heart-tugging documentary, rightfully departing at critical intervals from heroics to simply extol the wonders of the spirit.

Erik Weihenmayer lost his eyesight at the age of 13. While devastating, Erik’s blindness emboldened him to reach for the stars, racking up a series of sporting accomplishments few could rival. In 2001, Erik climbed Mt. Everest, sending word of his triumph all over the world, resonating deeply at the Braille Without Borders blind school in Tibet (run by Sabriye Tenberken and Paul Kronenberg). Looking for a role model, the school invited Erik to visit, but the world-renown climber had something better in mind: to help a select few of the teenage students overcome unimaginable adversity and make their own pilgrimage to a summit in the Himalayas near Everest.

“Blindsight” is actually two stories blended together to establish a more robust feeling of achievement. One side of the film is Erik’s “Climbing Blind” expedition, in which a professional team of mountaineers attempted to turn these shy Tibetan kids into students of one of the world’s more dangerous pastimes. Director Lucy Walker is quick to distribute chunks of sentimentality, but the emotion that’s offered with noticeable clarity is frustration. Not only does Erik’s team have to corral mountain-climbing amateurs, but they also have to deal with the frantic concerns of safety from panicky Tenberken and Kroenberg, who see the social value in permitting the odyssey to continue, but remain steadfastly vocal about the potential dangers they see as too great for their students to handle.

The other half of “Blindsight” inspects the history of the Tibetan teens, who view the adventure with great excitement. During the documentary, Walker returns to each of these young adults, who have been ostracized from their community (who view the blind as the demonic result of karmic punishment) and face monumental issues of self-esteem. The story of Tashi Pasang commands the most screentime. An abused Chinese beggar, perhaps kidnapped at an early age, Tashi is emblematic of the school’s pupils; he’s withdrawn, prone to mood swings, and is unable to communicate his fears. The climb is an important step to opening Tashi up socially, with the film taking the next step and following the teen as he searches for his lost family.

Spending time with the students, it’s obvious there’s a wellspring of elation behind their apprehensive exteriors. If “Blindsight” is capable of anything, it’s exhibiting the release of inhibition from these kids as they embark on their extensive climb. Erik nearly becomes a secondary character in the film, as does the climb itself, which is fraught with setbacks and an unexpectedly anti-climatic resolution. Regardless of success, “Blindsight” expresses the spirit of the moment with tremendous care, showcasing a group of remarkable teenagers embarking on the opportunity of a lifetime, which took them from the darkness of seclusion and fear to the light of self-worth. 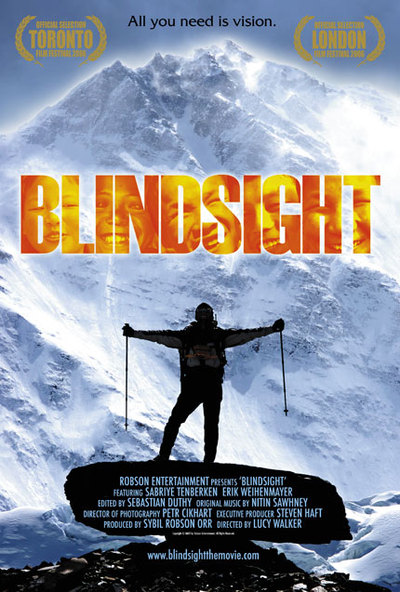