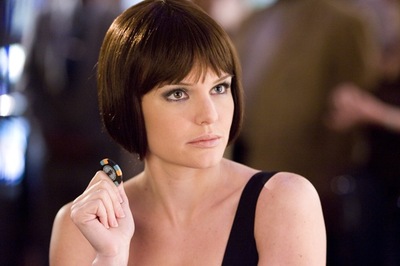 Adapted from the best-selling novel “Bringing Down the House,” “21” is a slick piece of amusement, cashing in on common fantasies of beating the odds, bedding the blonde, and dodging certain doom with only a few inches to spare. It’s a lively gambling drama that’s far better than it had any right to be, but is kept from greatness by some rotten dramatic choices.

Ben (Jim Sturgess, “Across the Universe”) is an MIT student struggling to find the money for Harvard Medical School. An opportunity is placed in his hands by Micky (Kevin Spacey), a professor who runs a card-counting Blackjack scheme during the weekends. Reluctantly, Ben joins this small group of students (including Kate Bosworth, Jacob Pitts, Liza Lapira, and Aaron Yoo), and together they fly to Las Vegas to clean out the casinos. Thrilled at first with the money raked in, Ben quickly learns there’s a price to pay for his greed, leaving him caught between Micky’s growing threats and the financial demands of his once-promising future.

Directed by Robert Luketic (“Legally Blonde”), “21” is incredibly glossy, hip filmmaking calculated to capture the butterflies of boisterous casino-floor victory and the slow, liquid release of personal problems when cash starts to flow. To that end, the picture is extraordinarily vivid; the director blasts blazing colors, the amps soundtrack selections, and stages rollicking Vegas nightlife, spraying big-screen candy everywhere. Luketic aims to put the viewer in the passenger seat of Ben’s odyssey into unremitting greed and moral confusion, and the film locates tremendous success in these areas of the screenplay. “21” can be an overwhelming sensory experience, but the point of this is to feel the pull of Ben’s temptations, to better appreciate his mistakes.

Played well by Sturgess, Ben is not a likable character; in fact, nobody in the picture has any perceivable sympathy, especially Ben’s spurned nerd best friend, played with greased-maw obnoxiousness by Josh Gad, who can stop acting right now if he’s elected to travel down the Dan Fogler route of loathsome fat-guy/quip-guy performances. To find an edgy rhythm to “21,” Luketic sacrifices the human element of the story. This creates problems throughout the picture, especially once the film asks the audience to root for the MIT students when, in fact, they come off just as underhanded and insatiable as Micky or the fatigued, obsolete Vegas video surveillance security forces (led by Laurence Fishburne) out to nail the counters.

Ben and his students aren’t Robin Hoods, and the screenplay clears room to address their downfall. However, there just isn’t enough substance to this ethics subplot to make it feel like “21” is really trying to understand these characters and their monetary paranoia. The film barely pays attention to the consequences of Vegas manipulation outside of hokey back alley beat-downs, and it’s not long before the film looks to pay itself off with a chase finale, resembling something out of 1970’s cop show. Luketic appears fearful of letting the audience leave the theater with any sort of realistic interpretation of right and wrong, so he slathers on the questionable heroics, effectively turning Ben into a saint.

The fun of “21” is getting lost in the details of the counting along with the characters. The picture does make the strategy architecture thrilling through use of detail-oriented photography and special effects, and the pizzazz of beating the casino at its own game is rendered triumphantly. It’s easy to get caught up in the hunt for Blackjack angles that “21” presents with significant charm. However, much like Las Vegas itself, it’s only fun in fits, and the next morning you might find yourself regretting spending time with something comprised entirely of surface delights. 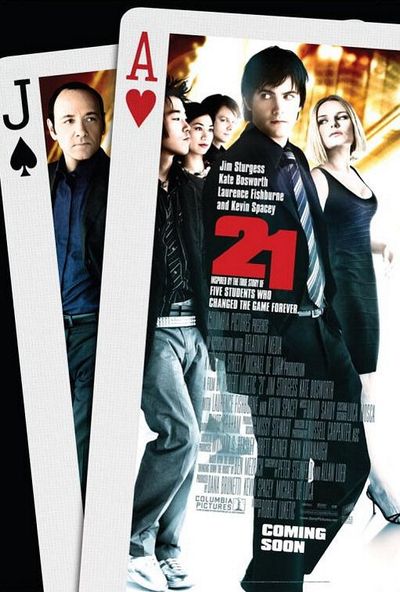