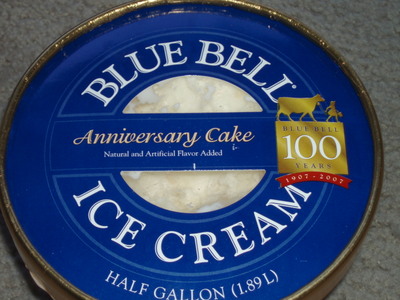 If you’ve been inside a grocery store lately, you may have noticed the ice cream section now takes up nearly half of the available square footage. Cold treats are huge business these days, with every conceivable jumble of flavors out there to make sure you stay the hell out of the average Coldstone or Dairy Queen. It’s war, didn’t you know?

I’d like to think my pseudo-refined ice cream tastes could keep up with the food snobs, but there are those scorching Arizona afternoons where I pummel those in my way to get to a melty McDonalds vanilla cone. That being said, there’s a company I’ve never heard of before called Blue Bell and apparently they’ve made some kind of deal with Jesus to produce the best ice cream on the planet.

According to the website, Blue Bell has been around for 100 years. Oops. Perhaps a new PR company should be a top priority for Blue Bell in ’08.

To celebrate this milestone the occurred, ahem, last year, Blue Bell issued a flavor called “Anniversary Cake.” The company has an extensive history putting out crazy flavors and neato promotional mix-em-ups, but nothing has approached all-holy perfection quite like Anniversary Cake. Certainly cake batter ice cream has rocketed to the top of the flavor charts in recent years, and every schmo with access to a distribution system has tried to pimp the frosted freckled freakshow. Criminally, most of these offerings taste how I imagine it would be like to lick the Las Vegas strip: sweet at first, then eventually a teary mistake.

Anniversary Cake “contains almond flavored ice cream with white cake pieces and amaretto flavored cream cheese icing.” Holy balls, that’s practically the cure for cancer. And I write that with the knowledge that for a great chunk of my adulthood, I never identified almond flavoring as the key to unlocking life’s great mysteries. It was only during my short stint tasting wedding cakes that almond clicked as a flavor monarch, and it was all confetti guns and cartwheels through traffic from there. I smooch almond flavoring.

So, imagine my sheer wall-of-sound, orgasmic joy to find ice cream that tasted like fabled wedding cake! Oh, you could’ve powered a small city with the electricity running through my body.

It’s almost needless to write the ice cream was perfect – simply the best flavor I’ve ever encountered, even rivaling the Sticky Toffee Pudding sensorial assault put out by those bastards at Haagen-Dazs. Anniversary Cake is scrumptious and, even better, it’s unique, lapping other cake-based ice creams through exquisite attention to fringe market detail.

Sadly, the centennial celebration is over for Blue Bell, so finding Anniversary Cake on the shelf is like stumbling upon a Criterion “Salo.” I ate my weight of the velvety delight last year, so perhaps it’s best to quit it cold turkey. However, if I find a tub of it at the store again, it will take every last synapse of restraint to keep from diving down to the floor and digging into it right there like a monster. 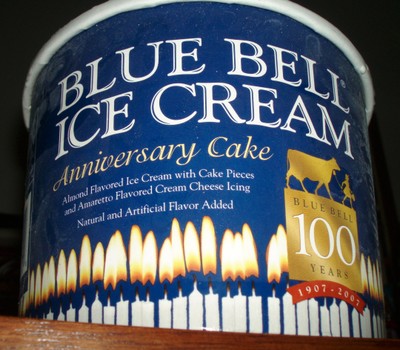 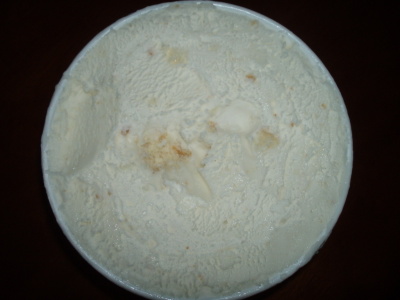 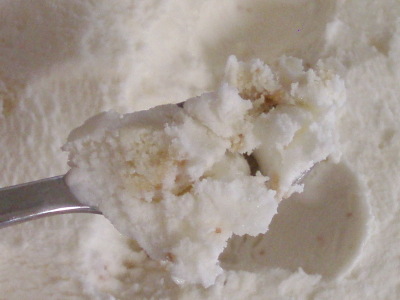 You should check out their banana pudding ice cream, Nilla Wafers included, it's quite tasty.

Finally! I've found a presidential candidate to get behind! When I close my eyes I can still taste it...

I CAN'T FIND IT ANYMORE!!

Oh! Seems so delicious... I am sure that cake is so expensive. Hmmm.. feels like I'm craving now for cake.