There’s a shadowy part of me that always dreamed to walk through the disturbingly crowded halls of a famous comic book/sci-fi convention, but I just never found the chance. Well, fate woke from its slumber this past week and dropped the Phoenix Comicon in my lap, and I just couldn’t pass up the opportunity to go mingle with fellow dorks.

My mind raced with thoughts of sweaty Stormtroopers running around giggling, and half-naked ladies doing cartwheels in iffy constructs of spandex and masking tape. What I failed to comprehend was that the days of a straight-up nerd convention are pretty much over. These cons are big business and have attracted a fresh new crowd to exploit for profit: the “cosplay” kids.

See! I learned a new term this week.

“Cosplay” loosely means teenagers and socially-stunted adults trying to out-costume each other, preferably with an obscure character from some basic cable anime show nobody watches, but that’s just my interpretation. Overall, it’s quite a sight to spy these younglings walk around the convention floor with ornate papier-mâché props clutched in their sweaty hands, or, for some of these poor bastards, strapped to their backs. The theme this year had to be "Naruto" (thanks Wikipedia); some nonsense about a blond kid with a metal bar on his head who fights evil. Bah, who knows. I’m old, and I don’t have time for the hilariously involved backstory.

Many of the adolescent attendees were dressed up in sometimes awesome, sometimes sad outfits: multi-colored creations that looked as though they ate up important Wii time and plenty of allowance. I applaud their efforts, especially when faced with such appalling public scrutiny. Those who skimped on the costumed details were easy to spot and silently judged. Dude, it’s “Dragonball Z,” not “Dragonball I’m-obviously-wearing–my-mom’s-pajamas.”

The rest of the ticket holders were the standard-issue social outcasts. I noticed loads of unwashed hair and stained metal t-shirts, not to mention sprawling facial growth on 99% of the men (myself included). The females kinda fell into the apple-cheeked, permo-braids, pinochle-with-grandma category of personal availability, and there were far more of these bra-challenged women than I expected to see. Plus there’s the added fun of knowing that even I, a bearded film critic wearing a “Flash Gordon” shirt, could get laid quickly in a place like this. I’m not used to that. It’s neat.

Another treat of sorts was the opportunity to gawk at celebrities. Not that Kevin Smith or Shatner was making a special appearance or anything, but the Phoenix Comicon did manage to lure Lou Ferrigno in to pimp posters of himself photographed in the classic green and purple. Lou is as huge as you might expect, but didn’t appear receptive to people taking pics without paying. I tried to sneak a couple snaps, but I didn’t want an Onionesque headline of “Hulk Smash Film Critic!” to be my legacy on this planet.

“Lois Lane” (v1.0) Noel Neill seemed kind enough, but was perhaps a little too elderly for the crowd. Jeremy “Boba Fett” Bulloch and Peter “Chewbacca” Mayhew looked bored. Various artists and authors flew under my radar as well. Truthfully, I was eager to see the big draw for any con: douchebag “Star Trek” cast members.

Phoenix had Chekov himself, Walter “Nuclear Wessles” Koenig, in person to sign autographs (for a fee, of course) and pimp his latest work. Koenig is a frail man, but appeared alert and ready to bleed the faithful dry. I’m on the fence about the whole “charge for fandom” system, but if that’s how these actors support themselves, I can’t judge. Funny thing is, there wasn’t much excitement for Koenig and tablemate, Tim “Tuvok” Russ. However, there was a line for Wil Wheaton.

The semi-famous child actor (“Stand by Me”) and scourge of “The Next Generation,” Wil made a rare con stop in Phoenix to spread some love and plug some books. He’s an amiable, funny guy; jovial as all get out, and really puts in an effort with the fans who blushingly saunter up to squeak hello (unlike that dick Koenig, who quickly signs then shoos). I know this because Lady A is a screaming geek for Wil and couldn’t resist the chance to gush over him. It was highly entertaining to witness. Wil made her day, and I found myself with renewed interest in the guy who made “The Curse.” Go figure.

Before the rainy afternoon was over, we checked out the “trailer room” where the organizers dumped some genre previews on a Mac and ran them in a lecture hall stuffed with tired nerds. Before “Dark Knight,” they squeezed in a tribute to Heath Ledger consisting of three photos on a loop for two minutes, along with a moment of silence for the fallen Joker. I couldn’t decide if this token of affection was immeasurably silly or earnestly sweet. There was also karaoke, panels and presentations, and a coloring contest for the wee ones. Oh, and jailbait. Just loads of underage girls who clearly left their houses in trenchcoats. Remind me to keep any future daughter of mine locked in her room until 30.

In all, it was swell time. While not the powerhouse comicons of the coasts, the Phoenix attempt really filled me up on the experiences I wanted to have, not to mention teaching me what the “kids” are into these days. Apparently this doesn’t include soap, razors, and good taste, but a nice group of future swirlie candidates nonetheless. 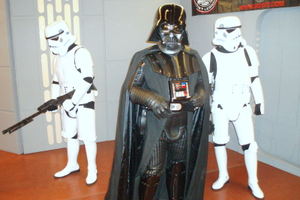 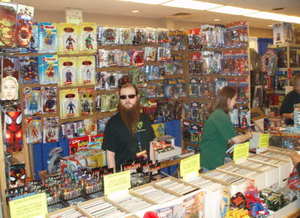 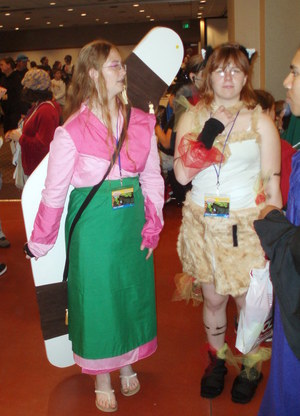 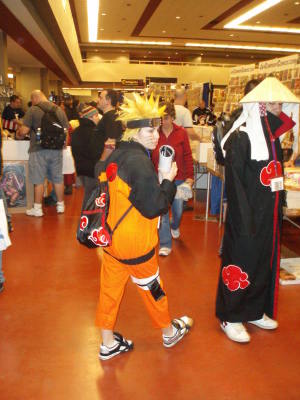 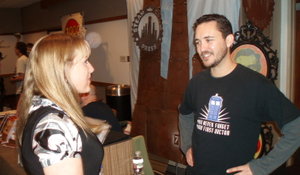 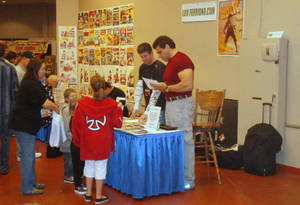 How long did it take you to put together that costume up top? You're quite the seamstress, looks like it fits well.

Wil Wheaton?! I'm embarrassed to be SO JEALOUS!