The Road to Indiana Jones: Part 2 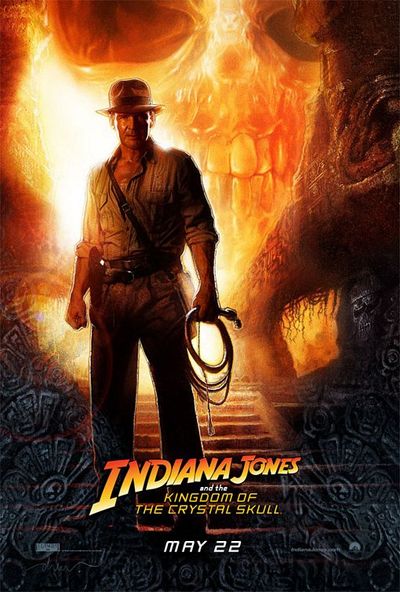 And now we have a poster.

Ok, so it isn’t a trailer. Now word comes that a teaser won’t see the inside of a cinema (or the early peek of YouTube-happy camera phone) until February because, and this is just a theory, Steven Spielberg hates us all. Ahh, what can you do. With Christopher Nolan’s raging "Dark Knight" glimpse, a "Narnia" sequel peek, and the Wachowskis’ brain-freeze "Speed Racer" trailer in theaters, it would be a hard event to top. Maybe Spielberg is right to hold off just a bit longer.

So, for the holiday movie rush, a teaser poster for “Kingdom of the Crystal Skull” has been issued to goose the fanboys and stun the Diet Coke-sucking unaware. There’s an uncomfortable history of iffy Indiana Jones teaser artwork to pore over, with “Temple of Doom” handed something resembling a discarded Warhol idea and “Last Crusade” saddled with that awful “The Man with the Hat is Back” tagline. Yuck.

With one-sheet wizard Drew Struzan designing the poster (he’s an Indy vet), “Kingdom of the Crystal Skull” wisely keeps a strapping Harrison Ford at the forefront, as if to say, “Yep, he’s 65 years-old. Suck it.”

Overall, the poster bears a striking resemblance to a "Temple of Doom" design (one that happens to be a personal favorite), mashing up certain terror with an unbeatable heroic pose. It’s fantastic to see this sort of feeling reinstated for the new picture.

It seems extra bonus points will be awarded to anyone who can figure out the alien-like image settled between the eyes of the crystal skull. It’s known that Lucas and Spielberg are taking cues from 1950’s sci-fi cinema for the sequel, but will they go all the way to extraterrestrial realms?

No doubt, this poster is a treat and officially kicks off the excitement factor the last year was only hinting at.

Bring on the damn teaser trailer!