Did "Saw IV" Steal My Quote?

This could very well be the most preposterous thought I’ve had in a long time.

Last year, on October 28th, I submitted a review for "Saw III" on rottentomatoes.com. My quote for the film was “If it's Halloween, it must be Saw. And if it's Saw, it must be God awful."

Sure, a cynical, sassmouth thing to write. What can I do? I have to compete for space with so many critics, occasionally you need a snappy hook.

It’s common knowledge the studios scan Tomatoes for advertising quotes and to get a better idea how their film is surviving in the world of reviews.

Cut to this Halloween, and this “Saw IV” poster shows up in movie theaters… 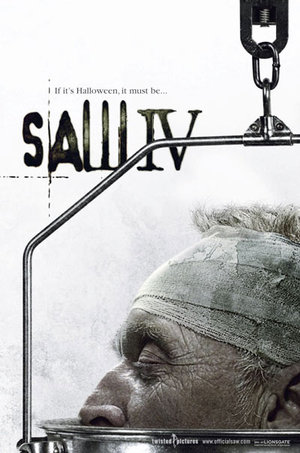 Who knows where the quote was taken from. I’m sure I wasn’t the only guy with that particular quip. However…it’s suspicious. Extra fun comes from the thought that Lionsgate used a quote from a negative review. Well, extra fun for me.

Steve Carell makes for a warm "Dan in Real Life."

"Before the Devil Knows You're Dead" is one of the best films of the year.

Food is trouble in "King Corn."

"Bella" is bland, but gentle enough.

Ben Affleck directs the hell out of "Gone Baby Gone."

"The Comebacks" is a lampoon for maroons.

The movie itself, not vampires, sucks the most in "30 Days of Night."

The true torture of "Rendition" is to watch it.

"Things We Lost in the Fire" is stunning drama.

God herself would hate these animated "Ten Commandments."

Turns out President Bush is the least of our worries in this "War Made Easy."

Nobody has heard of "Sarah Landon and the Paranormal Hour."

It seems whenever I review Tyler Perry product, the mail flows right on in. The mogul has an army of loyal followers, and they hate when some silly "white boy" (their words, not mine) comes in and besmirches the profitable Perry brand, making sure to let me know that I don’t understand the African-American experience.

Perhaps I don’t, but I’m pretty good at detecting rancid filmmaking, sociopathic screenwriting, and acting I wouldn’t subject to my worst enemy. Of course, this is lost on carefully programmed minds.

Here are some highlights:

You know, you would think that the world has change, sad to say that it hasn't... You people hate to see a Black Man be successful in what he does... If it is not made by a White film make then it is not sophistication... Who and left you God to judge what is sophistication... Tyler make movies that relates to the lives the the Black people live because you racist white people don't... Stop hating and give the man the respect that he deserves and until you live and walk a day in the black world don't judge... It saddens me to be long to a human race that include people like you...Remember you to will be judged hater...

Mr. Orndorf, it seems that you are clearly misguided in your evaluation of Mr. Perry's latest movie.  This was an outstanding film that depicted black people as many of are...working, successful professionals that face the same everyday problems as our white counterparts.  It seems as though, mainstream (white) America has a problem with this.  If we portray ourselves as anything other than pimps, hustlers, rappers, "ghetto fabulous", etc., you all have a problem with that.  As far as the scene of the white lady being afraid of the black women in the upscale store, that is 100% true and accurate.  It happens all the time...and the depiction of gays, well, hey that was over the top but it also was funny.  I myself am a 30 yr old, black IT professional who earns a six figure income and I can relate to many of the things that went on in this movie either by experience or by knowing someone who has gone through it. Bottom line, this was a great movie which would explain why it topped the box office when it is only showing in 2000 instead of 3000 theaters...and FYI, Daddy's Little Girls earned 30.1 million its opening weekend in the box office...I would hardly call that a failure.

(Brian note: "Daddy's Little Girls" opened with 11.2 million back in February. It is a hilariously awful picture)

If it where not for God this world would not be here, which means you would not be here.  If you are one of those educational, there has to be a logical reason for everything i got you there to.  I have taken Philosophy of Religion so you can’t pull that on me.  Wheatear you think there is a God or not, there is a force that brought the world into play something that is more powerful than all of us put together.  Do not allow the devil to use you like that. You people love to see negative thins all around you.  You critics give praise to people shooting up people and Fake warlords and vampires killing people, as well as movies that praise sex!  But when it comes to something positive, that the family can enjoy, not to mention that is a positive African American movie, Hollywood thinks it is not good enough.  Well Guess what God has the last say so and Why did I get Married is the number one movie in America.  But it is okay we all have our own opinions and it looks like your opinion did not count.

(Brian note: “Why Did I Get Married?” semi-endorses infidelity and uses STDs as a comedic device. Bring the kids!)

How was the homosexual depiction offensive?  Tell me you have never seen homosexual men that look and act just like that and I'll tell you to get out more! And in an hour 58 minutes of a movie if that is one of the things you take issue with, then you have issues.
Your review seems to give praise on the one hand and take it back with the other. All the characters were strong and real. Whether you like God or not, he is in the mix of everything whether you want him or not.

"We Own the Night" is pretty incredible.

"Elizabeth: The Golden Age" is the best rock opera of the year.

Tyler Perry improves with "Why Did I Get Married?"

"Naked Boys Singing!" is the most literal title of the year.

"Steal a Pencil for Me" show us love is here to stay.

Baseball is king in "The Final Season."

I wouldn't "Feel the Noise" if I were you.

"The Seeker: The Dark is Rising" Quality is dropping.

"Weirdsville" lives up to its name.